28 September 2016, Düsseldorf, Germany: Beat Wismer, General Director of the Museum Kunstpalast stands behind an installation by  Evelina Cajacob in the exhibition "Behind the Curtain, Disguise and Revelation since the Renaissance - from Titian to Christo. In the background is "Wrapped Beatle 1963 (Object 2014)" by Christo.

04 September 2015, Gerlingen, Germany: Rolf Bulander, the chairman of Boschs Mobility Solutions division stands in a Corridor of the headquarters of Robert Bosch GmbH.

07 September 2016, Düsseldorf, Germany: Pilot Thorsten Voss of the Police Air Squadron is standing in a hangar at Düsseldorf Airport in front his new Airbus H 145 helicopter.

16 November 2016, Hilden, Germany: Ralf Aust, a former Resident at the Franz Saales Haus, an orphanage in Essen, is looking over his shoulder. In his bags he carries the documents of his stay in the Franz Saales Haus. According to drug researcher Sylvia Wagner, drugs trials were executed on children in nursing homes in the 1950s and 1960s. Due to Problems in School, Aust was separated from his parents when he was only eleven years old. During his time in Essen, Aust was forcefully medicated. To this day he struggles for a compensation for his suffering.

24 September 2016, Bochum, Germany: Hannelore Kraft, then Prime Minister of the German state of North Rhine-Westphalia, laughs after her speech at the parties state conference.

04 November 2015, Stuttgart, Germany: Policeman Thomas Berger, head of Baden-Wuerttembergs Home Office's of "return management". Under his authority the state government moved a plan that included the deportation of immigrants and a system that would improve financial incentives to leave the country voluntarily.

08 September 2015, Weissach im Tal, Germany: Ian Schölzel, the mayor of the idyllic Swabian town of Weissach im Tal, is standing in the ruins of the burned down shelter for refugees. Almost immediately after Germany began to take in as many as 890.000 refugees that were stranded in Hungary and on EU borders in 2015, right-wing sentiment began to rise. When the planned refugee shelter in Weissach im Tal burned down, the image of the fire was the cover of "Der Spiegel" news magazine and became iconic for the surge in violence against refugees. "We won't give in" Schölzel says back in his office. "By our actions, we have to show that we bear the mark wrongly". Right-wing violence rose by more than 40 % to 1.485 cases in that year. 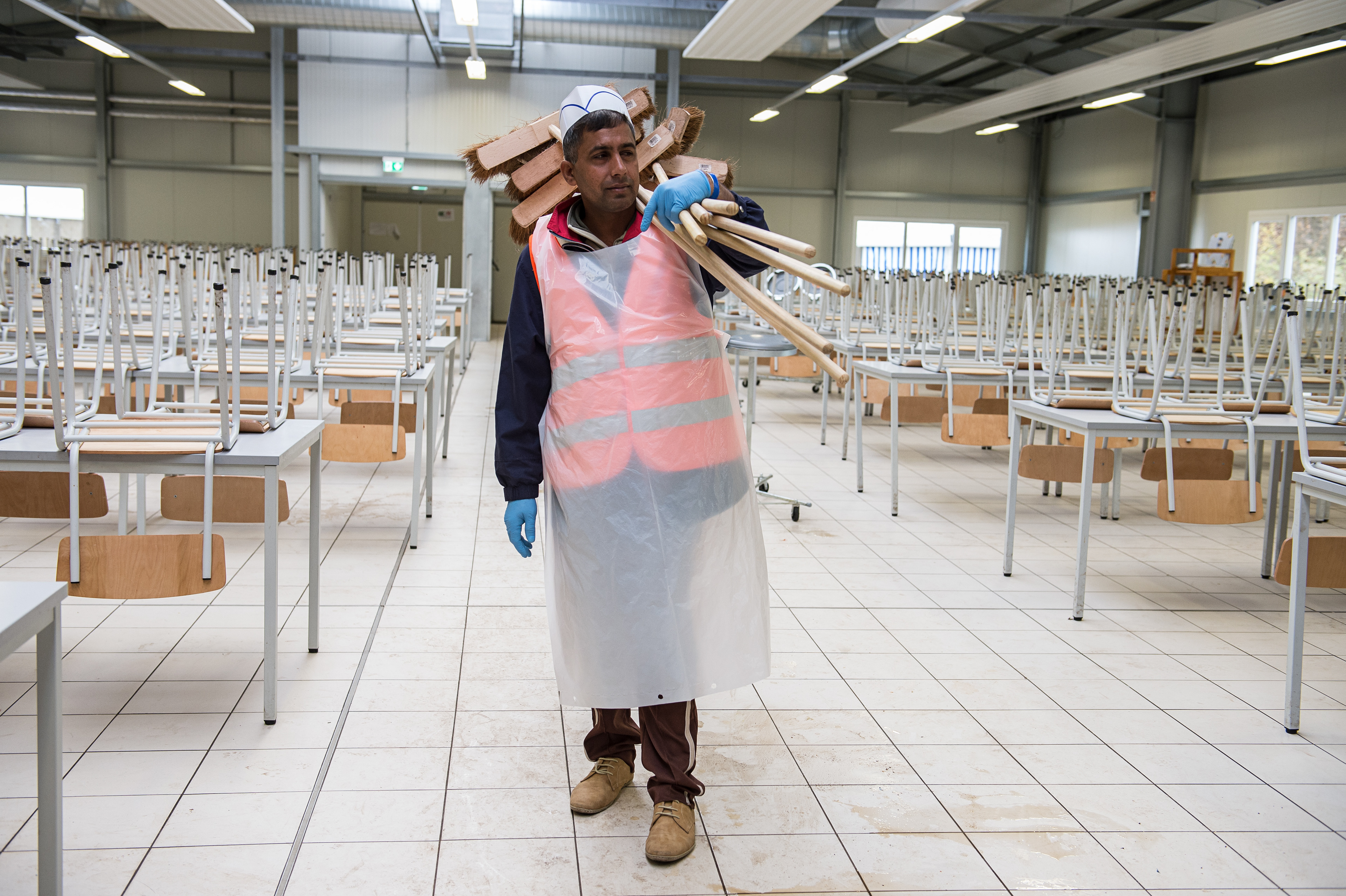 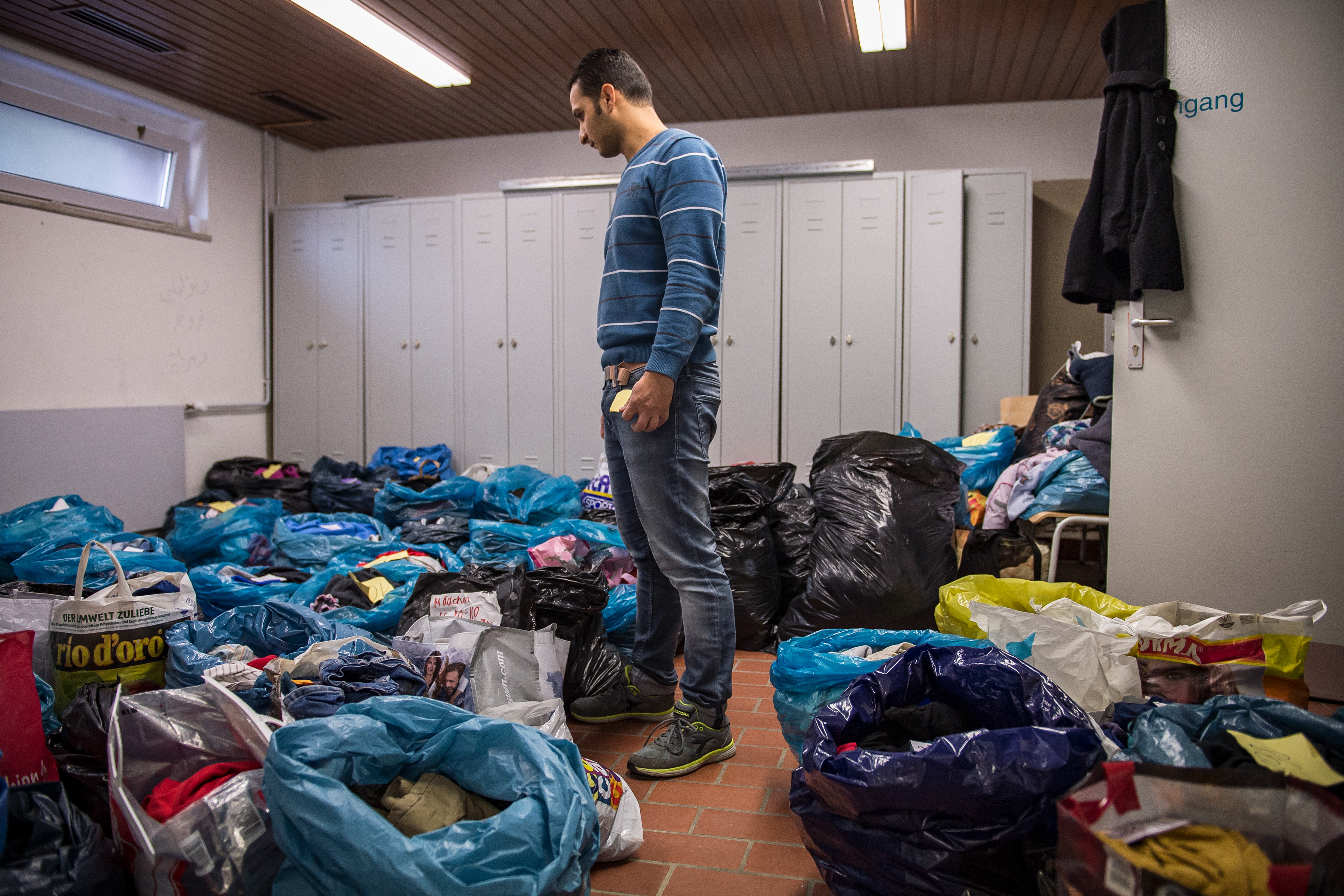 5 November 2015, initial acceptance center Ellwangen, Germany: Mohammad (l) from Pakistan carries several brooms over his shoulder in the cafeteria.
Issam from Syria looks at sorted bags filled with clothes in the laundry. Several hundred refugees were working in
Baden-Wurttemberg shelters for the slim salary of one Euro at that time. 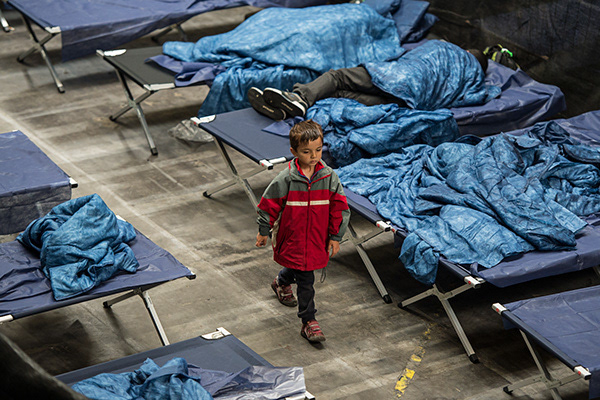 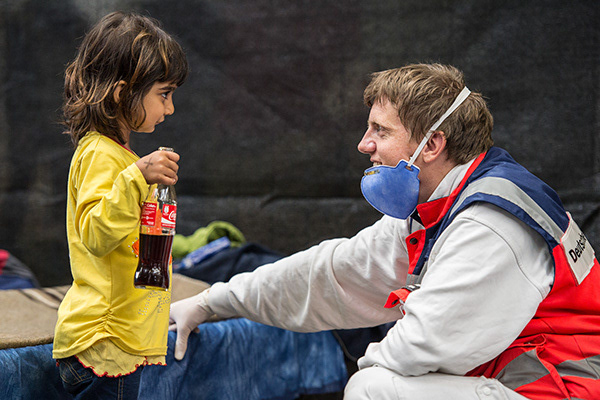 16 September 2015, Rottenburg, Germany: Hassan (l) from Syria walks through columns of field beds in an emergency shelter.
A volunteer of the German Red Cross plays with Zena from Syria. About 450 refugees arrived during the night in the hastily set up shelter.

07.09.2015, Rottenburg, Germany: Pamamadi from Gambia looks back from the police tape in front of his burnt out shelter.

09 July 2009, Stadelheim Prison, Munich, Germany: A refugee is waiting on a Bed in his cell. After having been on the run for a long
time München Stadlheim is one of the last places of a refugee´s ardous journey. Refugees waiting for deportation are often held in
custody in the prison.

12 August 2016, Berlin, Germany: Sven Kretschmer (r) and Tim Schmidt-Kretschmer, stand in front of the altar during their wedding ceremony in the Marienkirche. This was the first same-sex wedding of the regional church of Berlin-Brandenburg-schlesische Oberlausitz.

04 August.2016, Berlin, Germany:  Te evicted shop owner Hans-Georg Lindenau sorts merchendise from his wheelchair. The "M99 Gemischtwaren mit Revolutionsbedarf"  (Mixed goods with a revolutionary needs) was closed in May 2017 after a lengthy Litigation.

09 August 2016, Berlin, Germany: Anni Lenz, also known as "Grandma Annie" sits on a table behind her house in Reinickendorf. She became a local celebrity for her struggle for affordable rents in her lifelong neighborhood in northwestern Berlin.

25 August 2015, Bietigheim-Bissingen, Germany: Former president of the Deutsche Bundesbahn and company patriarch Heinz Dürr is standing in front of paint robots in the production hall of the main factory of Dürr AG.

08 June 2016, Berlin, Germany: The French singer Zaz holds on to curtains in a Hotel room.

29 January 2016, Berlin, Germany: Chef Ringo receives an order at the Hofbräu tavern. The house in which the Hofbräu is located was called "Fresswürfel"  ( food cube) thirty years earlier and was the largest canteen in the GDR.

19 July 2016, Berlin, Germany: Artist Pedro Boese, chairman of the association "Atelierhaus Prenzlauer Promenade e.V.", looks out of a window in his studio.

10 June 2015, Tübingen, Germany: Mouez Khalfaoui, Professor of Islamic Law at the Center for Islamic Theology of the Tübingen University, closes his eyes. The Center for Islamic Theology in Tübingen is one of four in Germany that was established by the Federal Ministry of Education and Research in an endeavor against extremism. The center trains future teachers and imams.

Memorials of Berlin
↑Back to Top